MD Textile's original Facebook Page is back online! Its official.

I've been sifting through the comments looking for a solution, but failed to find any. Only clues. I will share this with you the recovery process at the end of this post.

So What really happened? Why was it taken down? Did I violate any terms and condition by:


1. Displaying a currency note?  Maybe. Jamilah pointed out that we are not to depict the Malaysian currency in any form. http://www.bnm.gov.my/documents/currency/en_reproduction_guide.pdf   . However, we do not see posts with pictures of various currencies taken down. So why me?

2. Use a URL shortener? So unlikely, everyone uses it.

3. Offer a rebate for a vote? Some people call this vote buying. SITEC's faq says "You retain full creative and strategic freedom to maximise your online votes such as through in-store or social media campaigns." I'd like to see it as a marketing campaign, not elect your next prime minister.


Maybe I didn't violate any. Facebook business team reviewed the process of deletion and found that the "Page was removed in error".  Whatever the reason, I'm so thankful to the FB business team. My previous post has connected me with a few owners of missing pages. Trying to connect the dots, I have a suspicion that someone mass reported my post. Why was I targeted? I don't know. Maybe it was the work of an overzealous nominee.... And it worked. It killed my will to canvas for votes. So you win. It's ok.

So, what do you do when your page gets removed abruptly?

1. DON'T PANIC
2. Document in detail the events leading to the deletion. Keep all screenshots, postings, pictures and whatever you can find.
3. Document your ad purchases, ad ID
4. Publish them in a blog somewhere.
5. Post them on your wall, share it with a community that cares. (Hint: MECA)
6. Be prepared to be judged and labeled. I got the following titles: Vote Buyer / Hero / Victim / Idiot (I'm so amused :) ) But ultimately you are more interested in a solution. Amongst the chatter, there were a few ideas.
7. Even if you fail to get your page reinstated, your blog post can become a case study for everyone to learn and it becomes a good SEO content.


Looking back, I have my reasons why I published the controversial posts. (I took it down already) . I am aware it was a risky decision, but that's another topic for another post. If interested, just ask me to make this post in the comments.

So point number 8, the solution to Page anomaly issues is (jeng jeng jeng)


contact FB through http://www.facebook.com/business/resources (This link does not work anymore . Edit 5 April 2019)

Within an hour , i had a reply with the subject "Your Facebook Advertising Support Request    [ ref:XXXXXX" , and a notification that they were investigating. In 4 hours time, MD Textile's page was back online.

Looks like I have been using the wrong channels all these while. I'm sorry I may have portrayed FB negatively. But now, I know they do care. Not exactly the faceless 500lb gorilla, that many assumed to be.  My last correspondence with FB, is filling up a customer satisfaction survey, giving them the highest possible gratitude that I can.

30th March 2016, 7pm . MD Textile's original facebook page (http://www.facebook.com/mdtextile) was restored. As of now, i am still waiting for an official response from Facebook. I will post updates from time to time.

Six years ago, when facebook pages was launched we opened the MD Textile page (http://www.facebook.com/mdtextile). Six years later, after 52,000 likes, the page was removed suddenly and without warning. This was how my page looked like, on that faithful day it was removed. 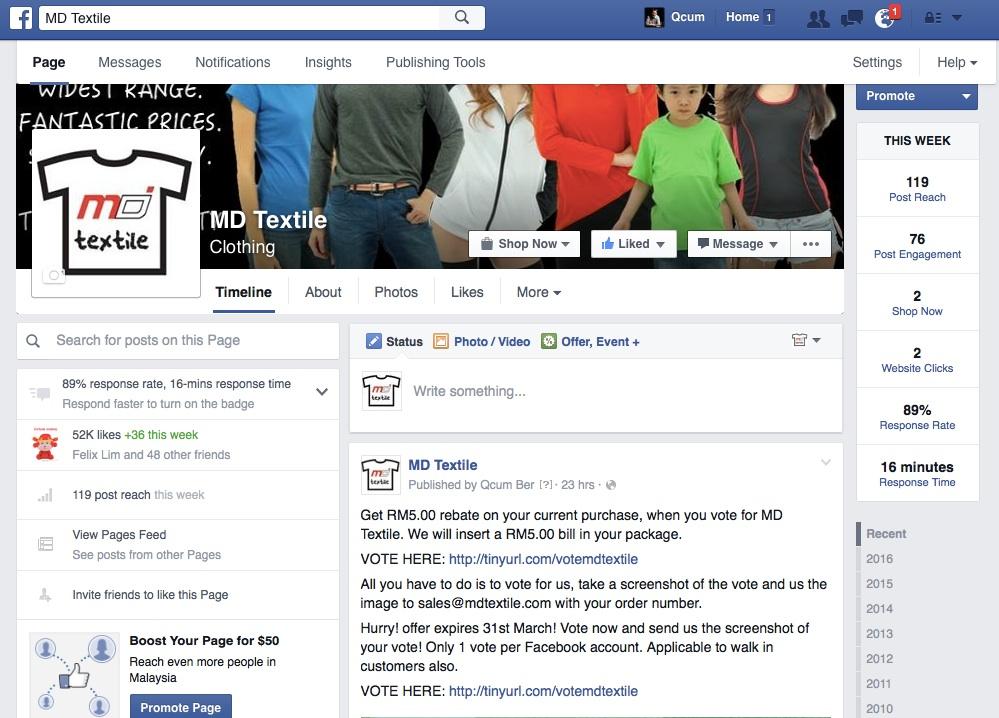 On a Tuesday night, 22nd March 2016, I noticed two of my posts that was made in the morning, suddenly disappeared. The post was about us asking our customers to vote for our website in a local competition organized by our local state government e-commerce council. In return, we will offer a RM5.00 rebate for any purchase made through our website. I thought it was strange as both the posts had approved ads running. I didn't think much of it and assumed it was a bug of some sort. So i reposted the article, boosted the post, and got it approved again! An hour later, when I checked back the MD Textile page, it was gone. No message, no notification, no nothing. 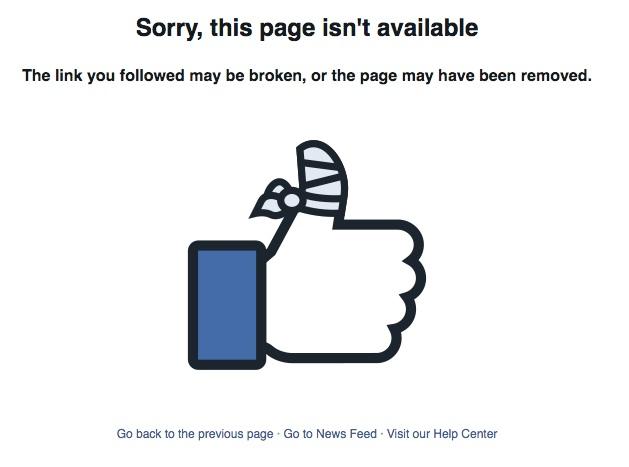 Really. I know Facebook has every right to do this. But there was no consideration on the countless time and money spent on this page. We sent a message to facebook, but there were no replies. I'm really facing a faceless giant, and my pleas for help just couldn't get through.

I tried to retrace my steps and do my own forensic. What did I violate? I have seen facebook issued warnings or put on temporary suspension on other users. But I got none of those. It must be something downright sinful.

This was the post that got removed the first time. It had a specimen picture of a five ringgit bill. It contains a message appealing visitors to vote.  With it, a shortened link to the voting app. (http://tinyurl.com/votemdtextile) The vote site evidently is the organizers own facebook polling app. Where really was the violation? I am stumped. A good friend of mine suggested, maybe it was the combination of the dollar bills and the usage of url shorteners, that scammers like to employ. 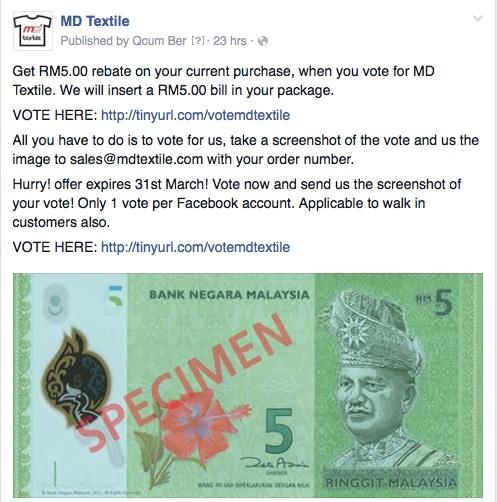 It make sense now. When I tried to post the url shorterner (http://tinyurl.com/votemdtextile), but a security prompt appeared. It would not accept this url. I had to change to another shortned url (bit.ly/topecm16vote) which is the site's organizers own created shorterner. Facebook accepted by post, and later when on to approve my boost. Here's a sample of the security prompt.

This, actually, is my best guess.  I may be a victim of a circumstances. Posting something but with the most unfortunate composition. Somehow through a proxy, I managed to get question accross to the facebook administrators. What did I do wrong?

Apparently it was removed by the security team. The security team's judgement is supreme. No amount of appeal is going to help. My ads and likes purchases is not going to count. I am advised to open a new MD Textile page. Here, supposedly, is the official reply from the facebook team.

Thank you for checking in with us.

I've checked on the Page https://www.facebook.com/mdtextile and can confirm that it has been deleted by our Security Team.

However, due to policy, we are not allowed to disclose any additional information.

Please do accept this decision from the Internal Team as final and irreversible.

So the facebook gods as spoken. It is final and irreversible. Looking at the facebook, page guidelines, i still cannot find my purported violations. What a rude reboot for me. I don't want this to happen to other page administrators.  So I will end my article with the following facebook page advice.

1. Use url shorterners with caution! Especially when get a security prompt that disallowed your link. It will draw attention of the security team.
2. Especially do not use url shorteners with an image of money on the same post. It looks like a recipe of a typical scam.
3. Run contests with caution, you are threading on grey areas.

Maybe in future, I'll just hire a pro to do it. If this post has benefited you, i invite you to like my new page. (http://www.facebook.com/mdtextile2) It's already 1 day old and has got almost 100 likes. Maybe in 1.5 years, at this pace, I will arrive at the positioned when it got punked. 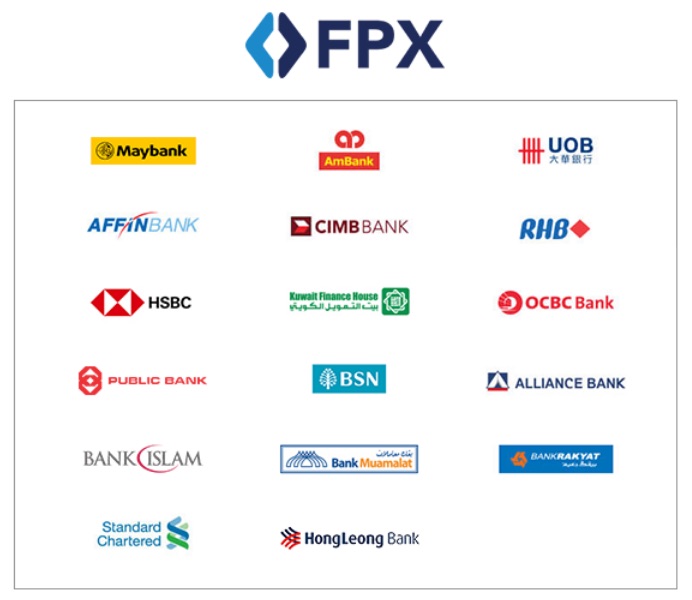